This page expands on the BCRD or the Broadband Cost Reduction Directive, a European Directive including measures to lower the roll-out costs of telecom networks by focussing on sharing infrastructure and on co-executing civil works.

What is the BCRD or Broadband Cost Reduction Directive?

The Broadband Cost Reduction Directive is the European Directive 2014/61/EU on measures to reduce the cost of deploying high-speed electronic communications networks.

The Directive includes a number of provisions, for instance on the re-use of existing physical infrastructure of (among other things) utility companies (such as ducts, masts, towers, etc.) to deploy high-speed telecom networks. The Directive also regards the coordination of civil works in all sectors, among which those of telecoms, energy, wastewater, transportation and other industrial sectors involving infrastructure. These measures create the terms for a more efficient roll-out of new physical infrastructure. A very considerable part of expenses for the roll-out of broadband networks goes to construction works, such as breaking up streets. These stipulations aim to provide more people in the EU with access to ultrafast Internet.

Consequently, the BCRD can be an important tool in the roll-out of fibre networks.

Main definitions in the BCRD

Physical infrastructure: any element of a network which is intended to host other elements of a network without becoming itself an active element of the network (for instance ducts, manholes, masts, street cabinets, etc.). It is important to note that this does not include cables, so not the fibre in itself.

Access point: a physical point, located inside or outside the building, accessible to undertakings providing public communications networks, where connection to the in-building physical infrastructure is made available - also see the figure below. 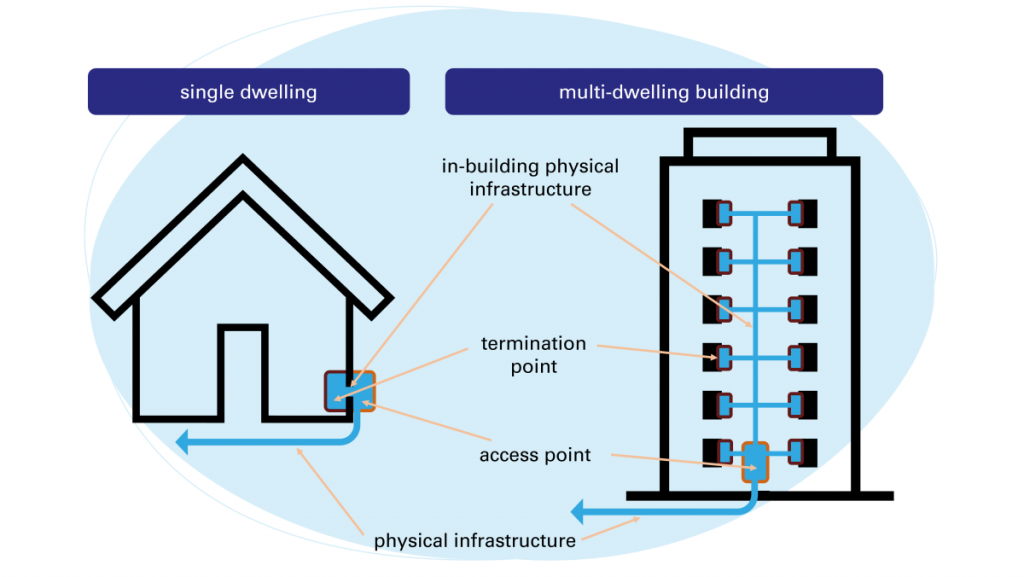 Broadly speaking, the BCRD contains the following elements. These stipulations all apply in the context of the roll-out of high-speed networks, i.e. networks capable of providing broadband access services at a speed of at least 30 Mbps:

Access to existing physical infrastructure and the minimum information relating to this:

Coordination of civil works and the minimum information relating to this:

A national dispute settlement body shall issue a binding decision on the terms of these conditions in case of a dispute.

All relevant information on the permit-granting procedure for civil works has to be made available via the single information point and decisions to grant or refuse permits should be adopted within 4 months.

The BCRD has been transposed in the Belgian legislation at different levels (interfederal, federal and regional).

There are different Acts, Decisions or Decrees each transposing a part of the Broadband Cost Reduction Directive.

These are the main documents transposing the BCRD:

There are also a number of decrees committing, per competence, to the Cooperation Agreement.

The provisions in the BCRD have been laid down at the European level, but this does not exclude that the Belgian legislation contains additional provisions on the information and access to physical infrastructure and on the coordinated deployment of networks.

There is for instance the concept of “working in synergy”, which, contrary to what is described in the BCRD, is not only compulsory for network operators performing civil works funded with government means.

In that regard we refer to the platforms used in this context in Belgium, and which usually have more functionalities than laid down in the BCRD:

The review of the BCRD

It is important to note that the European Commission is currently working on the review of the BCRD in order to render it even more efficient at accelerating the roll-out of high-speed networks. The public consultation with regard to this, ended on 2 March 2021 and the new Directive is expected during the first quarter of 2022.