Every network operator who has his own network can choose between several topology options to roll out optical fibre. This choice depends, among other things, on what kind of public he wants to reach (homes or industrial estates), the population density and on whether he wants to roll out a complete or partial optical fibre network.

What is FTTH and FTTx?

Optical fibre is used for various kinds of connections, see also the page on the possibilities offered by fibre. In Belgium, FTTH roll-out is currently under way. An FTTH network (Fibre To the Home) refers to the optical fibre connection that links the customer to the provider’s telecom network. In case of FTTH this optical fibre enters the home, but there are other FTTx networks, such as:

If the operator wants to roll out a full optical fibre network he has a choice between 2 main categories of network topology: point-to-point or point-to-multipoint. 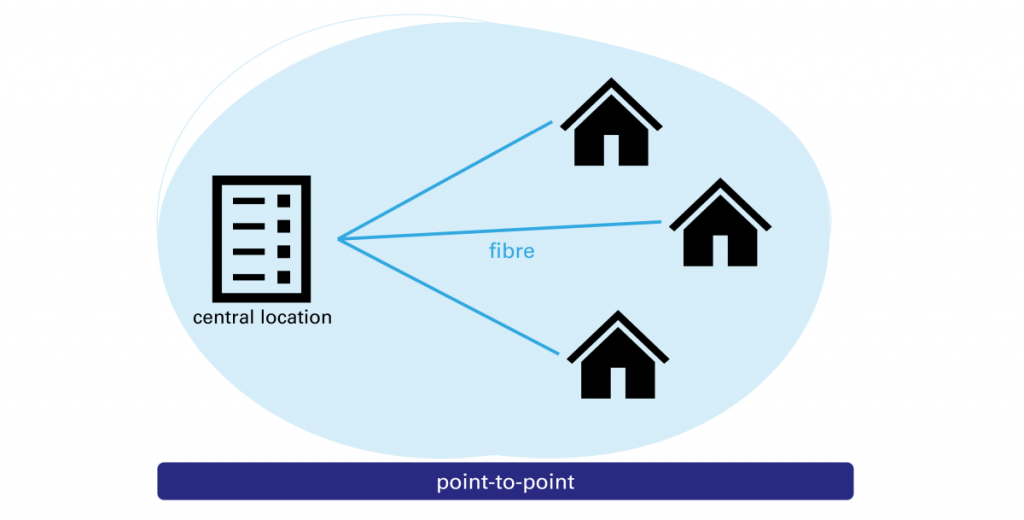 This type of network offers the following advantages: 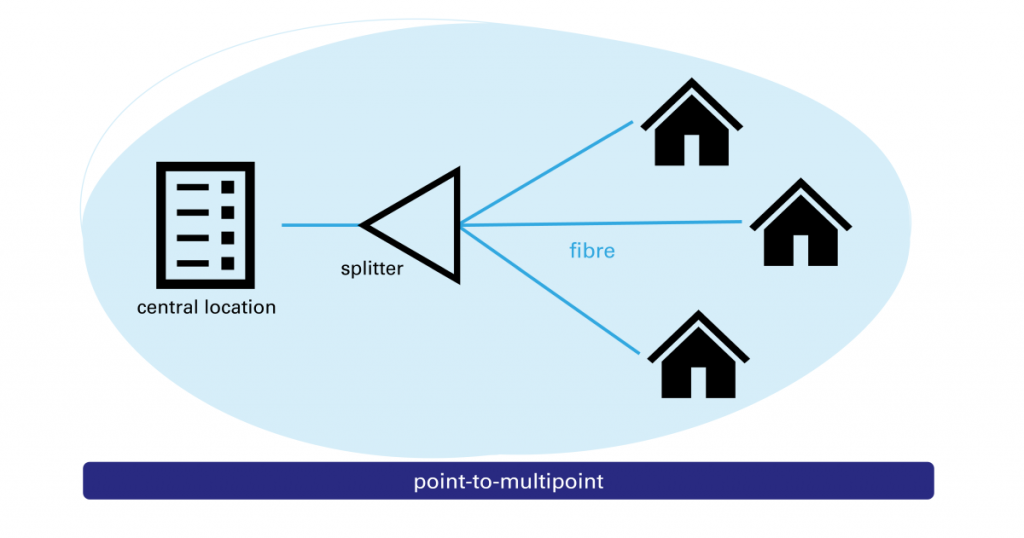 In case of a point-to-multipoint optical fibre network (or a PON network) one or more splitter(s) is/are situated between the central location and the end-users. Those splitters copy the input signal to several output lines, and therefore distribute the signal of an optical fibre among several optical fibres. Therefore, contrary to a point-to-point network, several end-users are connected to a single optical line card in the distribution point, thus sharing the capacity of the optical fibre connection.

The network operator can make a distinction in his optical fibre infrastructure depending on the type of customers he wants to connect.

Homes (but sometimes also companies) are connected differently, i.e. by means of a “Fibre to the Home” or FTTH optical fibre network. This FTTH network can have either a point-to-point or a point-to-multipoint network topology. When rolling out an FTTH network a network operator will choose at which locations he rolls out this optical fibre network. Next he will work out a roll-out plan per district in consultation with the competent authorities.

After having obtained all approvals the network operator will proactively start to install the optical fibre connection in the various streets, either underground or on the façades of homes. The last part, the individual connection of the end-user to this fibre network, usually takes place at the request of the end-customer. A network operator can ask a fee for this.

What are partial optical fibre networks? 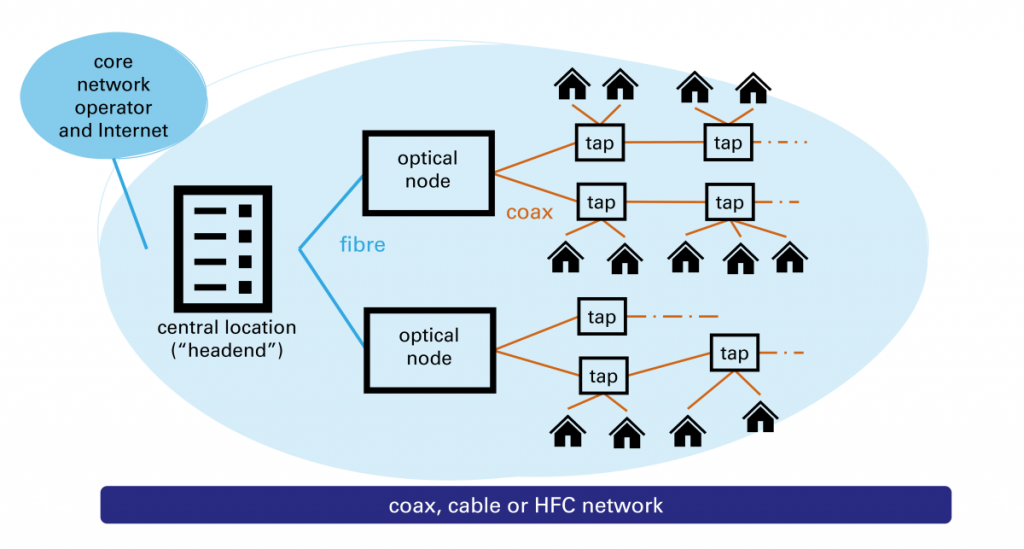 The coaxial or cable network (or HFC network: Hybrid Fibre Coax) of Telenet, Voo NV and Brutélé is the cable television network that has been adapted to enable bidirectional Internet traffic. In these networks too, there is an optical fibre connection between the central point and the local collection point (the optical node). This collection point is the starting point of the coaxial network to the end-users.

The coaxial network consists of subsequent taps (small branches) to which separate groups of customers are connected: this means that the coaxial access network is shared with neighbours, which may impact the quality of the Internet connection.

Contrary to the copper network the maximum speed does not depend on the distance to the distribution point. Just like optical fibre the coaxial network offers high speeds, going up to 1 Gbps nowadays. Although an optical fibre network is a more recent technology (with the possibilities described on the "Possibilities" page), the coax technology also continues to evolve and a cable network currently still meets most broadband needs.

In Belgium Proximus operates the only partial fibre-copper network. A fibre optic cable leaves the central building of Proximus (the LEX or the former telephone exchange) and links it with the local cable distributors in street cabinets (SCs). From those street cabinets an individual copper pair goes to each end-user, which is not shared with other customers.

The fibre-copper network is an evolution from the old copper network, meant for telephony, where the connection starting from the LEX was still entirely copper. By partially replacing this connection with fibre, the total length of the copper cable diminishes, thus making higher speeds possible. On this fibre-copper network Proximus offers a VDSL2 service with download speeds up to 100 Mbps. The maximum speeds that can be reached depend on the distance between the house and the nearest distribution point (usually the street cabinet).

By upgrading this network, even higher speeds up to a few hundreds of Mbps can be made possible, even though those will only be reached at locations close to the street cabinet. The advantage of optical fibre is that much higher speeds are possible at far longer distances from the distribution point. Therefore, in the areas where Proximus has rolled out fibre, it will in time put an end to the services over the copper network.